A roundup of what’s happening in Employee Services 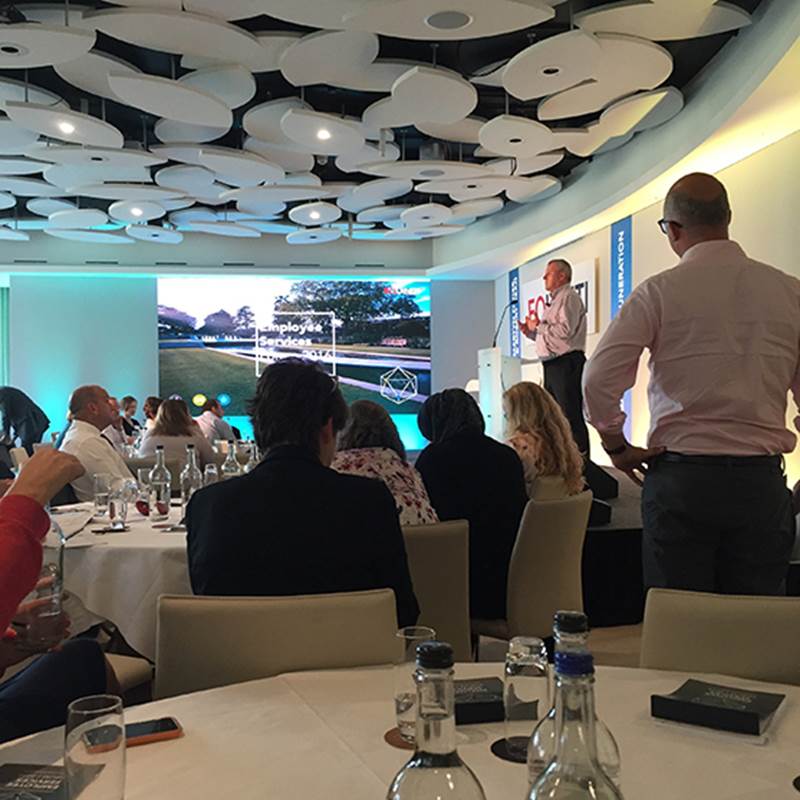 Our Employee Services Forum is always a key event in the calendar and in September we hosted our 13th annual event at a fantastic venue at The Grove in Hertfordshire.

One highlight was an Augmented Reality treasure hunt, devised by Equiniti Creative. This brought EQ Strata to life with a donation to charity for everyone completing the challenge.

This year we looked to align conference topics with digital capability. This worked really well with industry thought leadership delivered through multi-channel communications using state of the art media. Thank you to the speakers and everyone who came along. We have had some really positive feedback and look forward to seeing you all next year.

In our last update we included a link to the Executive Remuneration Working Group’s final report on executive remuneration structuring. In October, The Investment Association published their updated Principles of Remuneration for 2016, along with a cover letter outlining key changes. The letter highlights issues to be focused on ahead of the 2017 AGM season.

Equiniti Premier, together with Prism Cosec, will be holding a breakfast briefing for clients on 18 January 2017 in London, where the topic of remuneration strategy and getting new awards approved by shareholders at the AGM will be discussed. Further information about this event is due out shortly but let your Equiniti Relationship Manager know if you are interested in attending.

Responses to this consultation need to be submitted by 17 February 2017.

In October, following consultation on whether companies with non-tax advantaged share schemes require the continued availability of NIC elections, HMRC published its response and decision to retain NIC elections. A link to HMRC's response is here.

At the time of Royal Mail’s flotation on the London Stock Exchange in 2013, employees were given 10% of the shares under a SIP free shares plan. The three-year anniversary of the award was reached on the 15October 2016. With over 120,000 employees being able to sell free shares for the first time, Equiniti worked closely with Royal Mail in the months before, planning for different levels of sales activity. A month on, nearly 85% of employees have held on to their shares.

Equiniti recently carried out some research that showed that of the 6,000 investors surveyed, half of them first acquired shares through a company share plan. Many of these investors joined their employer’s all employee tax advantaged SIP or Sharesave plan. With just under a million employees participating in Sharesave and just over a million employees with SIP shares*, employee share plans provide an important introduction to investing in shares.

Tax advantaged share plans enable millions of employees to experience share ownership, accumulate wealth and learn more about investment. At a time when many people are looking beyond pensions for their long term financial planning, holding shares or other stock market assets can be a daunting prospect, so a company’s share plan can provide employees with a valuable introduction to saving and investment. Phil Ainsley said, “Decisions about when to join SIP and Sharesave plans and how much to invest, when and how many shares to sell and what to do with dividends, provide a great introduction to share investment for employees. As holdings increase in value, employees need to understand diversification and risks associated with ‘all your eggs in one basket’, then be equipped with information so they are comfortable with making further investment decisions that include share trading, spreading risk and financial planning for the short, medium and longer term.”

Further information about our research and findings are contained in our article, ‘Are the share plans offered by employers an employee gateway to savings & investment?’

*2015 ProShare survey. ProShare is a membership organisation; members receive a free copy of the survey, amongst many other benefits of membership (www.proshare.org)

A time for contemplation?

In Philip Hammond’s first Autumn Statement on 23 November, he announced that the tax advantages linked to shares awarded under Employee Shareholder Status (ESS) will be abolished for arrangements entered into on, or after, 1 December 2016. The status itself will be closed to new arrangements at the next legislative opportunity. ESS was introduced in September 2013 and enabled employees to give up certain employment rights in exchange for shares. With the scheme running for only a short time it has prompted us to reflect upon other changes past, present and (possibly) future.

With nearly 40 years of share plan administration under our belts we have seen some significant changes to employee share plans over the years including: Approved Profit Sharing Schemes being replaced with SIPS; SAYE schemes being introduced and banks becoming savings carriers; the globalisation of share plan offers and administration; as well as a myriad of changes to discretionary plans including changing DSOPs to CSOPs, the introduction of EMIs and use of share based plans. This has been set against an ever rising backdrop of compliance and regulatory changes.

Looking back over the past few years, although key tax advantaged share plans have remained broadly the same, various reviews, simplifications and legislative changes have had an impact including:

Along with these developments, there have been changes to employee communications and services provided both at launch/grant and release/maturity. Employee portals covering UK and international plans, telephone services (IVR/SMS), dealing and global nominee services have changed the way employees transact, providing more choice. Internets, intranets, social media, augmented reality have all impacted how and when employees are provided information.

So, in addition to the impact of Brexit, what’s currently being worked on and what’s on the horizon? We are likely to see impacts due to:

Two key projects currently being worked on impacting systems, portals and processes are MiFID II and GDPR, providing a focus for developments through 2017. As these projects impact all parts of our business as well as clients, employees, shareholders and investors a coordinated communication plan is scheduled.

Philip Hammond has confirmed that the tax and employer National Insurance advantages of salary sacrifice schemes will be removed from April 2017, except for arrangements relating to pensions (including advice), childcare, Cycle to Work and ultra-low emission cars. Although this is unlikely to affect most employee share plans, the draft regulations will need to be studied to see whether there are any implications. In addition, the Office of Tax Simplification has begun a review of how to reform Stamp Duty on paper share transactions. So, whilst we are waiting for Brexit to take effect, we’ve a lot to be getting on with!